Q: Why is Amazon being mean to Hachette?

A: Sometimes, even though a Supplier and a Distributor love each other very very much, they have a disagreement over who should make the most money off a Product.

Q: You mean it's about money? That's horrible!

A: Yes, it is. Money, being the root of all evil, leads to hardball tactics. Innocent Authors, who just want people to buy their damn books, get caught in the middle, and stamped underfoot.

Q: Why don't they just give all the money to the Authors? I mean, they wrote the Books, right?

Q: Dividends! But books are culture! No price can be put on culture! It's an abomination!

A: Yes: Do you want to know how much money they make?

Q: I don't understand. How can Amazon have ten times the revenue but basically the same profits as Lagardère. That doesn't make sense.

A: Amazon is a "growth stock". People are betting on future income. For the time being it barely breaks even. It sells and sells and sells - no one can beat it at that - but, sadly, it usually loses money.
Compare the ginormous blue bars (revenue) to the itsy bitsy and even nonexistent black bars (profits) 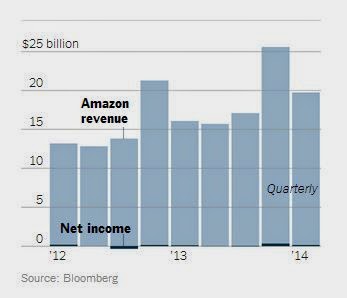 Q: But, according to the laws of capitalism, isn't a company supposed to make profits at least once in a while in order to stay in business?

A: Marx himself couldn't have said it better.

Q: So, um, what are Amazon and Hachette fighting about?

A: We are not privy to the actual negotiations. But word is it's about the discounts on ebooks. Hachette and Amazon do not agree on who gets what.  And until they reach an Agreement, Amazon doesn't feel like doing Hachette any favors.

Q: Just out of curiosity, how much does it cost to distribute an ebook from an existing platform?

A: You mean after it's written, edited, formatted and published? You mean the cost of distribution one additional ebook to a Buyer?

A: No paper. No physical store. No clerk. Zip. Automatic data integration. Paperless billing. Zero. Or pretty darn close to it.

Q: Doesn't that mean that after the setup and infrastructure is done, each additional ebook sold is basically pure profit? And that it's just a matter of dividing up the gains?

Q: Why don't Hachette and Amazon just be nice and give everything to the Author?

Posted by EBOOK FAQ for writers at 8:29 AM

Add blog to our directory.